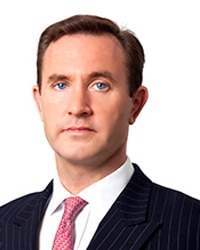 Dirk van Heck is a barrister who can carry out all the functions of a solicitor, too. Having trained as a barrister, he worked for a law firm for several years before returning to independent practice and has been taking instructions on a direct access basis for a number of years.

Whilst highly experienced in working directly with small businesses and members of the public, Dirk has also acted for blue chip clients, including investment banks, hedge funds and sovereign wealth funds. He has been involved in high-profile litigation, for example disputes stemming from the Madoff fraud, and some very high-value disputes, including some worth over US$ 1 billion.

Dirk likes to work on the basis of a full set of instructions: it’s important to getting the right advice, and to getting legal work done cost-effectively, to give a barrister all the information they need, as soon as possible after they’ve been instructed. Dirk is willing to work on the basis of fixed fees, as opposed to on a time spent basis, as long as it’s possible for him to give a fully informed and reasonably accurate time estimate for the work before starting it.

Dirk has experience of shareholder disputes, contractual disputes, injunctions, the restoration of struck-off and/or dissolved companies and advising on directors’ duties. He also has specific experience in the sale of goods and services, corporate insolvency, breach of confidence, foreign exchange agreements, futures and options, freezing and “Norwich Pharmacal” orders (for the disclosure of information by an innocent third party) and the tracing of money through bank accounts. Dirk’s expertise in this area goes beyond English law, to include disputes with offshore and/or cross-jurisdictional aspects.

Dirk’s experience in employment law spans unfair and wrongful dismissal (including “constructive” dismissal), sex, race, age and disability discrimination, protected disclosures and whistleblowing, working hours, deductions from wages and employees’ entitlement to bonuses. He also has experience of litigating points of employment tribunal practice and procedure, including in relation to evidence, in the Employment Appeal Tribunal, and has acted for an employer in a class action for age discrimination, which was widely reported in the UK media.

Trusts of Land and Property Ownership

When it comes to the division of properties between cohabiting, unmarried couples (or friends or family members), family law is not relevant: this area is governed by the law of trusts. Specifically, if the documents executed in a conveyance of a property do not reflect the intentions of the parties to a dispute and there has been no express declaration of trust, a court may be willing to impose a “constructive trust” over the property in order to reflect those intentions. Dirk acted for the successful appellant in one of the leading cases in this area and continues to handle cases in this common area of dispute.

Achievements:
Dirk is an Astbury and Jules Thorn Scholar of the Middle Temple and a Senior Scholar of Trinity College, Cambridge, where he was also awarded the Hooper Declamation Prize and the James Webb Prize for the History of Thought. Having been a Choral Exhibitioner at Trinity, Dirk has continued singing in a semi-professional capacity and he trained and led an office choir in a caroling competition whilst he was at Maples and Calder.

Appeal to the High Court from the decision of a planning inspector regarding an HMO (house in multiple occupation).

(Civil Procedure/Banking and Finance/Contract:  defence to summary judgment application based on alleged breach of foreign exchange contract; whether to permit defendant to adduce further evidence.)

(Evidence/Practice and Procedure:  appeal to the Employment Appeal Tribunal on the admissibility of a spent conviction for “kerb crawling”, in a discrimination case.)

(Application for relief pending an appeal to Privy Council:  issue regarding the inherent jurisdiction of the Eastern Caribbean Court of Appeal to stay execution and make declaratory orders and/or grant or continue an injunction.)

(Civil procedure/conflict of laws:  application to set aside an order granting leave to serve a claim out of the jurisdiction.)

(Contract/insolvency:  issue regarding the true construction of a loan facility agreement.)

(Insolvency/contract:  effect of premature service of a statutory demand in respect of a futures contract.)

(Conflict of laws/insolvency:  issue of the proper jurisdiction for the resolution of a dispute regarding a debt.)

(Insolvency/funds:  distressed hedge fund; issue of whether the dispute over a debt was substantial.)

(Trusts of land:  whether a deed of transfer of a property owned by a cohabiting, unmarried couple was subject to a constructive or resulting trust.)

Acting in an appeal to the High Court regarding a house in England that is subject to the Italian separation of estates regime, and resisting the English court’s assertion of jurisdiction over the same under the Trusts of Land and Appointment of Trustees Act 1996.

Acting in a defective product dispute based on negligent misstatement in the High Court.

Acting in a trust dispute within a family regarding a substantial commercial property.

Acting in a contractual dispute between two manufacturers regarding an experimental wind turbine.

Fill out my online form.